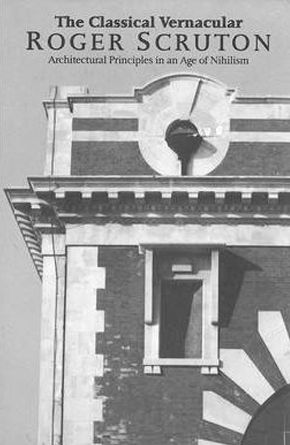 We have requested a new print run of The Classical Vernacular and are taking advance orders.

The essays, from the perspective of 'the classical vernacular', explore the nature and meaning of architecture, defending architecture without architects, and the 'vernacular tradition', that 'vulgar tongue' which is the natural language of space, proportion and light. He provides a comprehensive critique of modernism (not only the heartless modernism of architecture) from a serious intellectual perspective, based in a philosophical aesthetics which he has propounded in earlier books including The Politics of Culture (1981), The Aesthetic Understanding (1983) and The Philosopher on Dover Beach (1990), all published by Carcanet in its collections of Scruton's major essays and articles.

How to buy from us:

If you would like to order an advance copy -

Please email: This email address is being protected from spambots. You need JavaScript enabled to view it.

The cost will be £25 plus P&P. Please note, a delivery date has not yet been secured so please be patient! Thank you.

It is with great sadness that we announce the death of Sir Roger Scruton, FBA, FRSL. Beloved husband of Sophie, adored father to Sam and Lucy and treasured brother of Elizabeth and Andrea, he died peacefully on Sunday 12th January. He was born on 27th February 1944 and had been fighting cancer for the last 6 months. His family are hugely proud of him and of all his achievements. (12.01.2020)

Roger Scruton Was a Conservative. But What Kind? Robert P. George - https://www.nytimes.com/2020/01/29/opinion/roger-scruton.html

Scruton was the greatest thinker of our age. Daniel Hannan -https://www.telegraph.co.uk/news/2020/01/18/roger-scruton-greatest-conservative-thinker-age/

We owe it to Scruton to follow his example. Douglas Murray - https://www.telegraph.co.uk/news/2020/01/13/owe-roger-scruton-follow-example/

Towering intellect whose only crime was to be a conservative. Toby Young - The Daily Mail

Roger Scruton is dead, but his books and ideas will live on. Daniel Johnson - https://www.thearticle.com/roger-scruton-is-dead-but-his-books-and-ideas-will-live-on?utm_source=bibblio_article_page

The philosopher's mind at its end. Mark Dooley - https://thecritic.co.uk/the-philosophers-mind-at-its-end/

The Gratitude of a Lover of Wisdom. Nicholas Bartulovic - https://amgreatness.com/2020/01/17/the-gratitude-of-a-lover-of-wisdom/

Obituaries in the Czech media:

We mark the conclusion of a most interesting year by expressing sincere gratitude to all the many people who have sent messages of support and appreciation to Sir Roger, in the wake first of the media storm and later in the light of his cancer diagnosis. Happy Christmas and warmest gratitude to you all.

The process of recovery has begun, and we look forward to a remission. Meanwhile the good will expressed has been quite overwhelming, and has helped Roger to move back towards his desk, to take up his pen, and to experience once again the joy of living and writing. Soon he hopes to make the next step, out into the winter fields, there to refresh his mind with the experience recorded in these paragraphs from News From Somewhere:

“Our own green lane has retained its character, as a living and self-healing thing. And in the winter it takes on a beautiful remoteness. Its soggy surface, bordered by blackthorn hedges where the red beads of bryony linger into the New Year, acquires a faint silver sheen, and the sparse winter light lies in flakes on the waterlogged ruts, as though scattered there.
It is the winter that such place provide their most lasting refreshment to the eye. For life has retreated, leaving its many colours half-hidden but perceivable, and the landscape is filled with a subtle counterpoint. The lesson so patiently taught by Corot, Turner and Cézanne – that no natural object is truly monochrome, and that even in the blackest thicket can be discovered all the colours of the palette – is repeated by winter. And that is why there is no better time to visit the country, to walk or ride in the fields, and to take the chance of the weather for the sake of the eyes.
Indeed, the worse the weather, the more refreshing the effect. Green dissolves in water, loses its sickly surfeit, and allows the residual notes of autumn to appear through the storm. Driving rain and wind-tormented branches fill the air with spangled flakes of red and brown. The bare trunk of an ageing hawthorn, deprived of its green mantle and its distracting gift of berries, comes suddenly alive, its bark streaked with vermilion, folded into itself and breaking away to reveal long stretches of polished pewter. The mottled gold of the weeping willow, the deep crimson hue of the dogwood, the pallid cinnamon of the field maple, the many tobacco-leaf, rust coloured and auburn highlights in the bark of an ash: all these are a source of delight, once you begin to notice them. The last ogee leaves of hazel, saffron yellow at the edges, but shading into green, recall the colours of the nut itself, while here and there in the hedgerows the vermilion rosehips and the last purple sloes give a poignant farewell to the life that produced them, like jewels in an old lady’s hair.
It is an interesting exercise to stare into a dark, denuded hedgerow and count the colours. Every shade of red and blue, from salmon pink to scarlet, and from deepest indigo to pale forget-me-not, is lurking there, recuperating from the light of summer. And as you watch these hues glimmer like embers you come to understand some of the mystery of colour how red excludes green and yellow and blue; how white is somehow not a colour at all, and the metal shades are like glosses in which colours are trapped and made invisible. These strange phenomena are not explained by the physics of light – a fact that Goethe noticed, and which led him to compose his great treatise on colour. They are not facts about things, but about us seeing things. Pondering them we are also pondering the mystery of consciousness. How is it that the world not only is, but also seems? Why was it not sufficient for the world to be?"

Roger Scruton: A year in which much was lost – but more gained. The Spectator- 21 Dec 19

Despite everything, I have so much to be grateful for

January
My 2018 ended with a hate storm, in response to my appointment as chair of the government’s Building Better, Building Beautiful Commission. But the new year brings a lull, and I hope and pray that the Grand Inquisitor enthroned by social media will find another target.

And is also available here Laudation_address_of_PM_Orban.pdf

A report can be read from Hungary Today here https://hungarytoday.hu/orban-lauds-sir-roger-scruton-loyal-friend-of-freedom-loving-hungarians/

30th anniversary of the Velvet Revolution 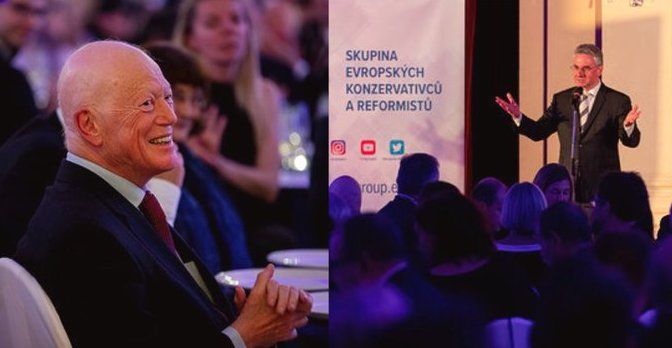 On Friday 15th November  Sir Roger was awarded the Silver Medal by the Senate of the Czech Parliament in commemoration of the 30th anniversary of the Velvet Revolution, which saw the abolition of the communist system in the former Czechoslovakia and the liberation from totalitarian control of the Czech and Slovak people. The was medal presented by the President of the Senate at a gala dinner in Prague, in the presence of the British Ambassador, and many of those who took part, both in the dissident movements in Czech politics, and in the underground university that was established to offer education to people who had been expelled from the official system. Sir Roger is delighted that the help offered to Czech and Slovak citizens by his fellow countrymen is being recognized in this way, and hopes that the deep sympathies established in those years will remain as influential in European politics as they were in the decade after 1989.

Czech reports can been seen below

The 1989 uprising against communism in Eastern Europe was a bid for freedom, and for many commentators it was little more than that. The oppressors happened to be the Communist Party, backed up by their Soviet masters, but they might have been the henchmen of a tin-pot dictatorship or a gang of Mafiosi. The important point, for many observers, is that the oppressors had set out to control things, and the people had at last said no.

We are delighted to share with you the wonderful programme which has been thoughtfully curated with Roger’s interests at heart for this year’s Alumni meeting. We recognise that many of you are unable to travel or join us this year, but we wanted to share the programme in case your reservations have changed or restrictions lifted. We have a small group so far confirmed and now that we have a fabulous weekend planned, the opportunity is now open to all.

The cost of the course will be £1200 per person, payable in advance by 14th August. As ever, this will cover everything for the duration of the course, but does not include your travel to the RAU on Thursday 27th August.

Take a look at the programme brief here - Alumni_programme_for_Website.pdf

Please do not hesitate to be in touch if you have any questions or would like to reserve your space.

Following on from the Government’s latest COVID-19 public statement we are sorry to announce it is not possible to hold the Scrutopia Summer School between the 29th July and 7th August this summer. We feel the Summer School is all about friendship, socialising and intimate seminars which would be difficult to conduct in our present situation. In addition, air travel is likely to be extremely difficult.

This is an unprecedented and challenging time for everyone and the health, safety and enjoyment of all those that attend and are involved with the summer school remains our number one priority.

We apologise for the delay in making this announcement but are grateful to you all for your support and co-operation at this busy time. Sophie and I would like to take this opportunity to thank and wish you well through this challenging time.

Streets With Nooks and Crannies Are Beloved and Endangered - TAC, 4 Oct 19

A building may appeal for its formal perfection, its harmony of proportion and the grammatical discipline with which it matches part to part. But it may appeal despite lacking those things, by offering enticing glimpses of the life within, intriguing apertures, invitations to enter, to explore, to imagine.

RT @matraszek: At last my own copy of the great ⁦⁦@HorcherF⁩ ‘s tome on ⁦@Roger_Scruton⁩ has arrived. Can’t wait to digest and enjoy in the…
In loving memory of writer and philosopher Roger Scruton. Two new books to seek out:𝘛𝘩𝘦 𝘔𝘦𝘢𝘯𝘪𝘯𝘨 𝘰𝘧 𝘔𝘰𝘶𝘳𝘯𝘪𝘯𝘨 ed. Mi… https://t.co/8FrU8ixI7K
Just in time for Christmas...details of our Summer School Programmes can now be found on the website https://t.co/8ucm2u1Z5j
Follow Scrutari semper on Twitter