The Uses of Pessimism 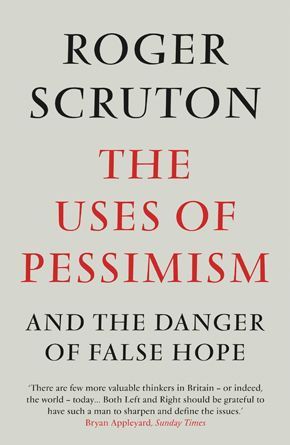 The argument of this book proposes  that the tragedies and disasters of the history of the European continent have been the consequences of a false optimism and the fallacies that derive from it.

In place of these fallacies, here is a passionate defence of both civil society and freedom. The true legacy of European civilisation is not the false idealisms that have almost destroyed it - in the shapes of Nazism, fascism and communism - but the culture of forgiveness and irony which we must now protect from those whom it offends. The Uses of Pessimism is a passionate plea for reason and responsibility, written at a time of profound change.

"[The book] does what it says on the cover: it describes how useful pessimism as a cast of mind is in times when we appear to be ruled by people under the spell of various fallacies of false hope. Worse than that, the effect of other people's optimism (and I, like Scruton, use that term in a wider than usual sense) on the rest of us is often negative and sometimes downright destructive." Simon Heffer, The Telegraph

"Once you get the hang of the argument, much of it paradoxical, the case for a cheerful sobriety - for that, in the end, is what Scruton wants - is persuasive enough. More interesting, however, is the philosophical background, presented with his familiar encyclopaedic breadth and Nietz­schean clarity of expression." George Walden, The New Statesman